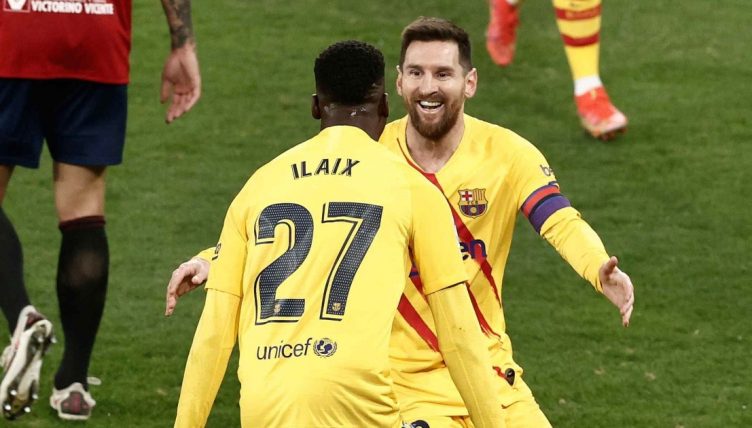 18-year-old Barcelona midfielder Ilaix Moriba scored his first goal for the club in some style in a 2-0 win at Osasuna on Saturday night.

Ilaix has turned heads with some cameo appearances in recent weeks, assisting for Trincao on his La Liga debut, a 5-1 win over Alaves, before bowing to Ronald Koeman after a cameo in their 2-0 victory over Sevilla.

The midfielder was brought on for the final 25 minutes at El Sadar as Koeman’s side were still protecting a narrow one-goal lead, after Jordi Alba put the finishing touch to a brilliant through ball from Lionel Messi.

And Messi was at it again late on, notching his second assist of the game by teeing up Ilaix, who had plenty to do himself.

Rather than go first time, he took a touch to move inside before launching an absolutely lethal strike from outside the box, sending the ball flying into the back of the net.

Osasuna keeper Sergio Herrera got his fingertips to it, but there was no stopping this.

“This goal will never be forgotten, I will take it to the grave. Ansu [Fati] is like my brother and I’m glad I’ve scored my first goal in the same field as him,” Ilaix said in his post-match interview.