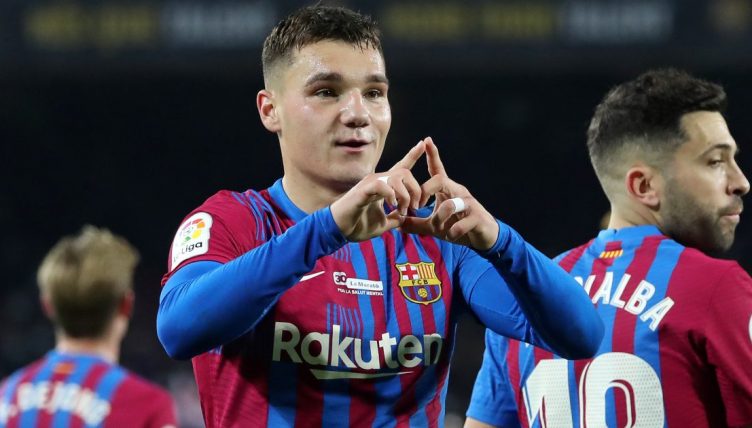 Under Xavi, Barcelona have been turning more and more to young players from their famed La Masia academy – and one of them, Ferran Jutlga, scored a brilliant goal in the Copa del Rey on Wednesday night.

Barcelona’s legendary midfielder Xavi, who won dozens of trophies as a player at the Catalan club, took over as manager in November after the sacking of Ronald Koeman.

Since then he has gone pedal-to-the-metal in restoring the Barca tradition of using young academy players.

Admittedly, his hand has been forced somewhat by the financial strife that the club is currently experiencing, but you get the sense that Xavi is genuinely committed to the youth revolution. And why wouldn’t he be? He was once one of those La Masia graduates.

One name in particular that jumps out from Xavi’s time at Camp Nou is Ferran Jutgla.

Jutgla had never played a senior game prior to Xavi’s arrival, toiling away with Barcelona B for the months between joining from Espanyol in summer 2021 and Koeman departing.

But Xavi needed a direct, pacy forward to fit his system and handed Jutgla a chance in the Copa Diego Maradona friendly with Boca Juniors. Jutgla grabbed it with both hands, scoring a proper thunderbastard to make his mark.

Since then, he has started three La Liga games, scoring the opener against Elche in December.

On Wednesday, the 22-year-old was given another chance in the Copa del Rey game against Linares Deportivo and came up trumps again.

Linares took the lead early on, but Barca came roaring back, equalising through Ousmane Dembele before Jutgla gave them the lead with 21 minutes to go.

After receiving the ball wide on the left, Jutgla ran straight at his man, cut inside and curled a delicious finish into the far corner of the net.

It was a mirror image of the sort of goal a certain Arjen Robben used to specialise in. If Jutgla can achieve half of what Robben managed, he’ll have a very good career.

Barcelona have turned it around! 🔵🔴

Ferran Jutglà makes it 2-1 after Ousmane Dembélé had started the comeback 🔥 pic.twitter.com/yoZS8Z94b0