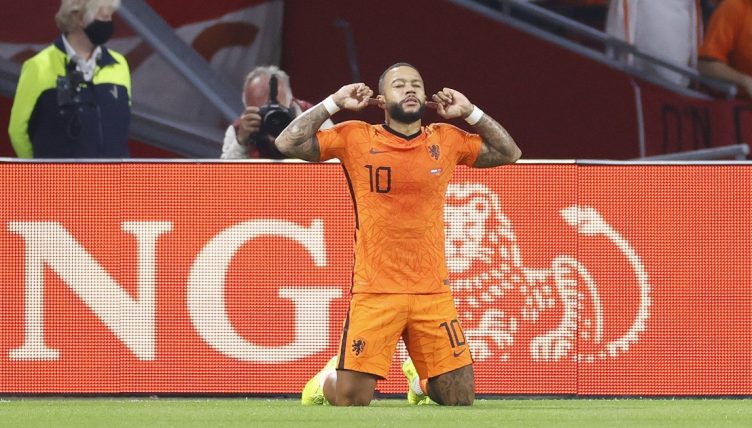 The Netherlands thrashed Turkey 6-1 in their World Cup qualifier on Tuesday evening with Barcelona‘s Memphis Depay helping himself to a hat-trick in the Johan Cruyff Arena.

Having disappointed at Euro 2020, the Netherlands replaced manager Frank de Boer with Louis van Gaal – who took the Dutch to the semi-finals of the 2014 World Cup.

And they tore into Turkey here, looking for revenge after their 4-2 defeat against the same opponents in March.

Everton flop Davy Klaassen provided the assist for Depay’s first and the new Barcelona signing doubled his tally with a cheeky panenka before half-time.

By this stage, Turkey were begging for mercy but none was forthcoming. The second-half was only nine minutes old when Depay completed his hat-trick with a diving header on the goal-line to touch home Steven Berghuis’ cross.

It was his first international treble but Depay wasn’t entirely satisfied after the game.

“We were often sloppy, especially me,” he said, adding that he had lost possession the first three times he had the ball.

“But if we start like we did, we make it easy on ourselves. After going two-up, we expanded our game and then you can afford those sloppy moments. But we should actually try and keep a high level, and I’m talking about myself here again.

“Everyone might think I’m just jubilant now after the hat-trick. I’m happy, yes, but I expect more from myself.”