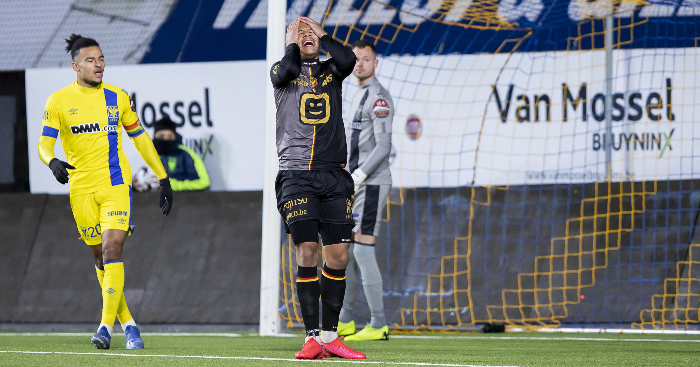 Think you have seen the worst miss in football history before? Well, you might have to think again.

Aster Vranckx was playing for Mechelen against Oostende in the Belgian top flight on Saturday when he produced a miss so bad it was even too x-rated for a Nick Hancock bloopers DVD.

The 17-year-old had the chance to put his side one goal to the good in the second half when, at the end of 15 of the worst seconds of professional football history, he found himself four yards out with the goalkeeper in no man’s land, no defenders in sight and the goal at his complete mercy.

Unsurprisingly, he ballsed up his effort, lofting it onto the crossbar, but fortunately for him the ball rebounded to Vranckx, who simply had to tap it home to give his side a 1-0 lead.

With the ball falling to his feet, all Vranckx had to do was to tap it home to give his side a 1-0 lead. Yet somehow he managed to stand on the ball, getting his feet tangled and losing his balance, resulting in both him and the ball hitting the post, allowing a defender to scramble it away to safety.

To make matters worse for the Belgium Under-19 international, Oostende netted a 95th-minute winner, with on-loan Celtic defender Jack Hendry on-loan getting the goal.

This miss by Aster Vranckx for Mechelen is all kinds of incredible pic.twitter.com/Fc8wsYAs3D