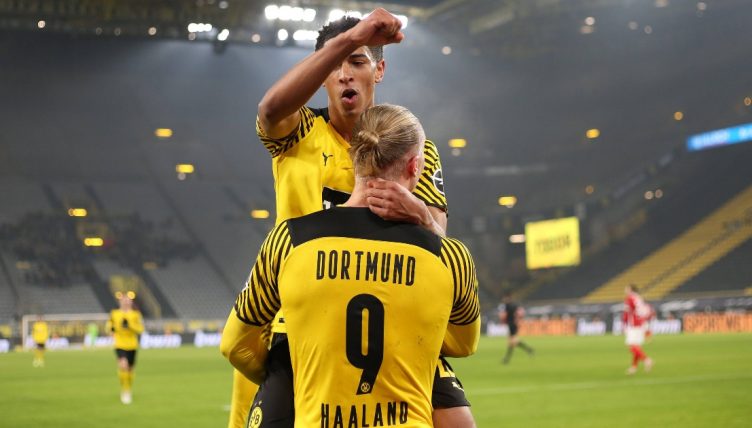 Jude Bellingham and Erling Haaland served a reminder of why they’re two of the most in-demand youngsters in world football by linking up as Borussia Dortmund thrashed Freiburg 5-1 on Friday night.

Haaland scored two of the goals, taking his tally to 15 goals in 13 Bundesliga appearances this season, while Bellingham is now up to double figures for assists in all competitions after setting up the Norwegian for Dortmund’s third on the stroke of half-time.

It was an excellent goal, with Dortmund flooding the opposition half and Bellingham pushing up high and tenaciously winning the ball deep in the opposition half – reminiscent of Jurgen Klopp’s Liverpool at their most intense and German coach’s famous line that “No playmaker in the world can be as good as a good counter-pressing”

Bellingham then strode forward with the ball and showed composure to choose the right moment to play the ball into Haaland’s path – and predictably Dortmund’s No.9 made no mistake with the finish.

The 18-year-old England international has been tipped to follow in the footsteps of Jadon Sancho and return to the Premier League at some point in the near future. Liverpool are said to be interested, and on this evidence Bellingham would be a perfect fit.

Haaland, meanwhile, caused shockwaves by giving an explosive post-match interview that hinted he could leave Dortmund in the coming fortnight. It appears that the striker will soon be at one of Europe’s elite clubs, with Real Madrid, Barcelona and Real Madrid all frequently linked.

“The last six months I have chosen not to say anything out of respect for Dortmund, but now the club has started to press me into making a decision,” Haaland said after the match, speaking to his compatriot Jan Age Fjortoft on Norwegian TV.

“All I want to do is play football. But they press me … about my future, so that means I have to make a decision soon.”