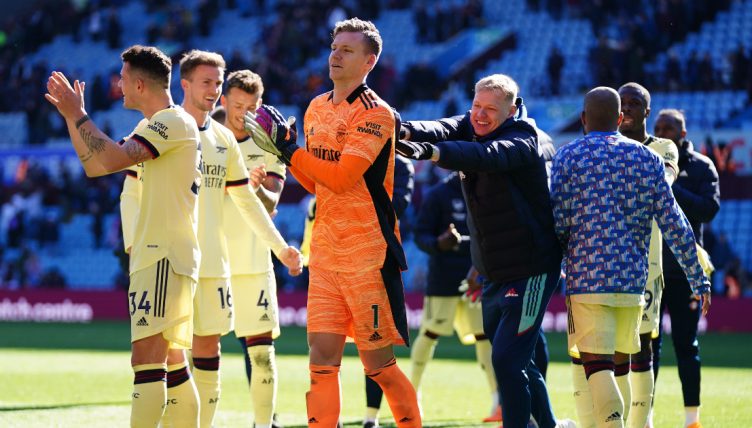 Bernd Leno had to make his first Premier League appearance since August after Arsenal’s first-choice goalkeeper Aaron Ramsdale picked up an injury ahead of their game against Aston Villa, and performed well as Arsenal ran out 1-0 winners.

Arsenal held on at the end to secure their clean sheet and Leno made a huge save from a Philippe Coutinho free kick in the very final minute.

It’s never easy for a goalkeeper to be thrown straight into the action after being on the bench for so long, but Leno remained calm throughout and his efforts were recognised by his teammates who ran straight to him at full time.

There is sometimes bad blood between goalkeepers competing for the same spot in the side, the relationship between Jens Lehmann and Manuel Almunia being a prime example, but there is nothing but unity in Mikel Arteta’s squad.

This was highlighted when Aaron Ramsdale, who travelled with the squad despite his injury, embraced Leno in scenes of joy after the final whistle and both goalkeepers looked delighted with the victory.

Ramsdale’s arrival in the summer of 2021 saw him usurp Leno as Arsenal’s number one and it is expected that the Germany international will leave the club in the summer.

But Arteta confirmed that Ramsdale will be absent for a few weeks, potentially opening the door for Leno to try and reclaim his number one spot.

“Aaron Ramsdale has got an injury, he had an injury in his oblique muscle and he will be out for a few weeks,” Arteta stated before kick-off at Villa Park.

This injury means Ramsdale will miss out on England’s upcoming international matches against Switzerland and Ivory Coast, whilst Leno has not been called up to the Germany squad for the first time since 2019.