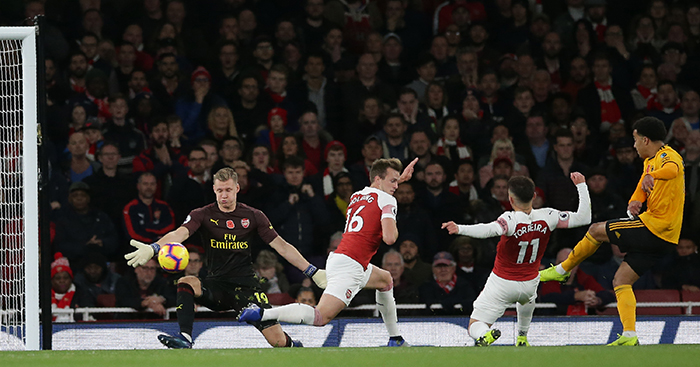 Arsenal extended their unbeaten run to 16 games with a 1-1 draw against Wolves on Sunday – but they had Bernd Leno to thank for staying in the game.

Henrikh Mkhitaryan scored four minutes from the end of normal time to rescue a point for the Gunners, but Unai Emery’s side were well below par at Emirates Stadium and were grateful for a man of the match display from their goalkeeper.

Leno started the season on the bench behind Petr Cech, but an injury to the Czech against Watford in September presented the summer signing with an opportunity he has grabbed with both hands.

Against Wolves he produced arguably his best performance for the club yet – and you can view three of his best saves below.

Despite rescuing a point, Arsenal will nevertheless be disappointed not to have taken all three on a day which saw Manchester City and Liverpool both win at the top of the table.

The fact that the Gunners fell behind again will be of particular concern to Emery – along with Cardiff, they are one of only two sides in the Premier League yet to be leading at half-time so far this season.

The stats behind Lacazette’s upturn since Aubameyang joined Arsenal