Watch: The best GIFs about Kevin De Bruyne after yet another superb assist 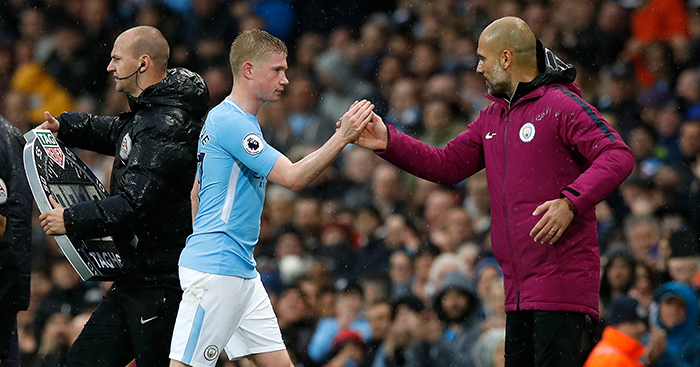 Kevin De Bruyne produced yet another superb assist in Manchester City‘s 3-0 win over Burnley on Saturday – and the internet certainly enjoyed it.

De Bruyne has been moved into a deeper midfield role by Pep Guardiola this season, but it’s hardly affecting his ability to impact games at the top end of the pitch with eight assists and two goals in his last eight games for City.

His latest piece of magic set up Leroy Sané for the third goal against Burnley at the Etihad Stadium and was his 69th in all since the start of 2012-13, more than any other player in Europe’s top five leagues.

De Bruyne is one of four City players with 10 or more goals and assists combined across all competitions this season, with Sergio Agüero (11), Sané (11) and Sterling (10) also into double figures, but it’s the Belgian playmaker who was once again catching people’s eyes most against Burnley.

Here are a selection of the best GIFS from Twitter:

That pass from De Bruyne 😍 pic.twitter.com/vLlYh79Lxw

Me watching that DeBruyne to Sane DIME for the goal!⚽️#ManCity #buzzsaw pic.twitter.com/n3jey3oEBO

that thru ball from de bruyne pic.twitter.com/N1YvPWV8Ul