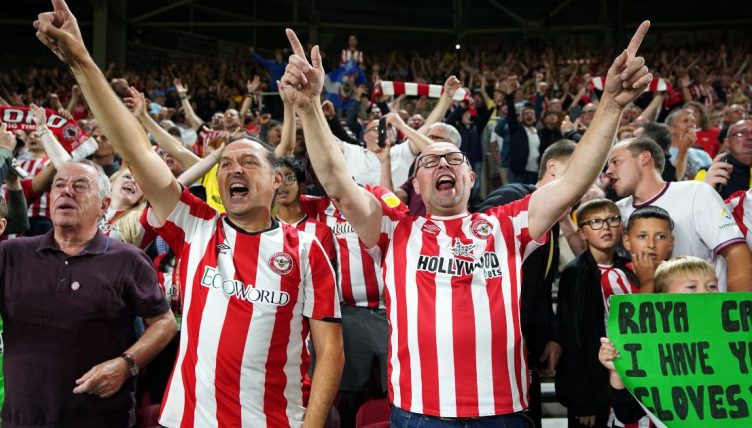 It was a brilliant opening day of the season for Brentford as they beat Arsenal 2-0 to mark their return to the top flight in style – and they couldn’t resist rubbing it in.

This season is the first time the Bees have played in the top division in 74 years and from the evidence so far, it seems like their fans are desperate to make the most of it.

There were rousing renditions of ‘Hey Jude’ before and after the game, tears, little kids giving it the middle fingers on the telly and an all-round terrific atmosphere, which was only buoyed by the result.

With their side looking controlled an comfortable, Brentford fans saw fit to lord it over their bigger, richer London rivals Arsenal a bit, coming up with two amusing chants to taunt the beleaguered Gunners faithful.

First the home support sang, “You’re just a shit Tottenham Hotspur”, which you can hear in the video below.

Then, as The Times’ Henry Winter reported on Twitter, they burst out in a rendition of, “We’re just too good for you.”

If their performance on Friday was anything to go by, then Brentford fans are going to enjoy this season very much indeed.

The German analytics company who could revolutionise stats in England

13 of the best signings by newly-promoted clubs this century