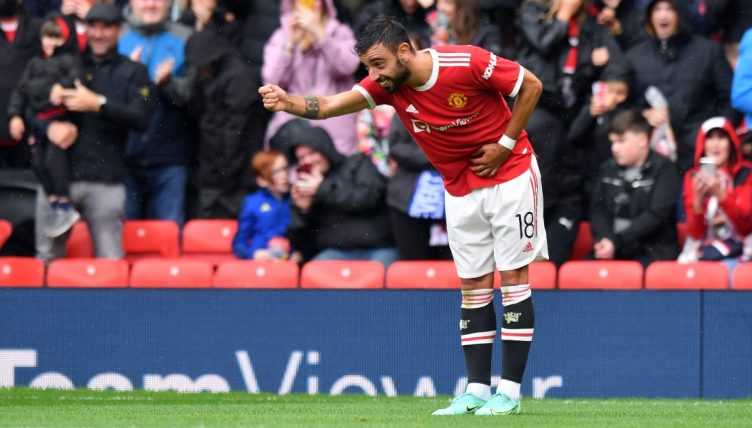 Manchester United rounded off their pre-season preparations in style on Saturday afternoon, comfortably beating Everton 4-0 at Old Trafford, and Bruno Fernandes caught the eye in more ways than one.

The Portuguese talisman, eager to put a disappointing Euro 2020 behind him, fired in a wonderful free-kick to put United 3-0 to the good inside half-an-hour after Harry Maguire and Mason Greenwood had also found the net.

Diogo Dalot made the watching fans wait another hour for a fourth, stooping to flick a brilliant improvised header over Asmir Begovic.

After being shipped out on loan to AC Milan last season, it will have no doubt been a big confidence booster for the 22-year-old. But that was not about to stop Fernandes from giving him some stick after full time.

As the players walked off the pitch, the cameras caught the two countrymen in conversation, with Fernandes appearing to mimic Dalot’s header.

He seemed to insinuate that Dalot did not know where the ball had gone and that the finish was down to luck.

Have a look at the incident below.

How did we land this gem at our club 😭 pic.twitter.com/YbYDSfsM3G