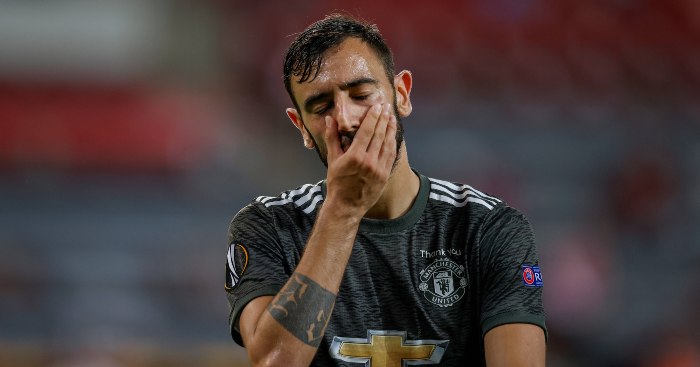 Bruno Fernandes was clearly unimpressed by the efforts of Manchester United‘s defence as they were knocked out of the Europa League semi-final by Sevilla on Sunday evening.

Despite taking an early lead through Fernandes’ ninth-minute penalty, United slipped to a 2-1 defeat as Sevilla struck through Suso and Luuk de Jong.

De Jong was able to ghost in between Victor Lindelof and Aaron Wan-Bissaka to get free in the penalty area and convert a cross from the right.

And United’s defender clearly angered Fernandes, who clashed with Lindelof in the aftermath, although the Sweden centre-back showed no signs of backing down himself.

Bruno Fernandes and Victor Lindelof disagree regarding who was responsible for that Sevilla goal 😳#Club2020 pic.twitter.com/z0vOI8smsn