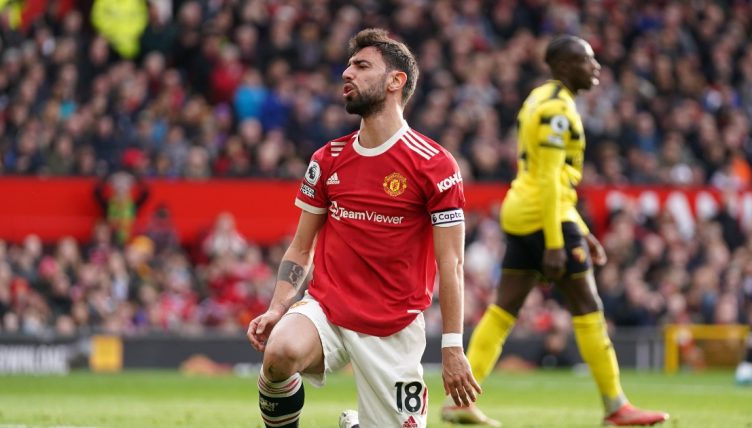 Bruno Fernandes’ decision to shoot rather than square it to his Portugal team-mate Cristiano Ronaldo may have cost Manchester United two points in their 0-0 draw with Watford on Saturday afternoon.

It was one of several moments that summed up United’s afternoon, whereby profligate finishing was to blame for failing to break the deadlock against Roy Hodgson’s side.

Ronaldo had a goal disallowed for offside and a penalty appeal waved away, while he also found himself in the way of a goalbound Bruno Fernandes shot, but he surely would have scored with an open goal if Fernandes had passed rather than shot after a lovely flowing move cut through Watford’s defence.

Fernandes had a one-on-one with Ben Foster and will have believed he had every chance to shoot himself, given it was a presentable opportunity, but the Watford keeper saved and United surely would’ve had more of a chance of scoring had he passed to Ronaldo.

It’s clear from the way that Ronaldo moved his arms that he was frustrated by the decision from his Portuguese compatriot.

“Our job as coaches is to help the team to create enough chances. The number of clear chances we had today had to be enough to win a game like this,” Ralf Rangnick said after the match.

You imagine this is one of the moments he probably had in mind.

As long as Bruno Fernandes keeps playing behind Cristiano; Ronaldo will never unlock his full capacity. This video is clear example. This should be a No brainer pass and easy peasy tap in and that's all. This is not the first time he refuse to give him final ball@ManUtd #MUNWAT pic.twitter.com/Rj8A8Z1tHW

Too many egos in that Manchester United team. They might have to beg Greenwood to come back in. Rashford is trash , Elanga is still young, Cavani can't stay fit. Ronaldo is 37, he needs rest.
Against Watford Bruno Fernandes selfishness cost them … pic.twitter.com/ARPZrmUpcJ