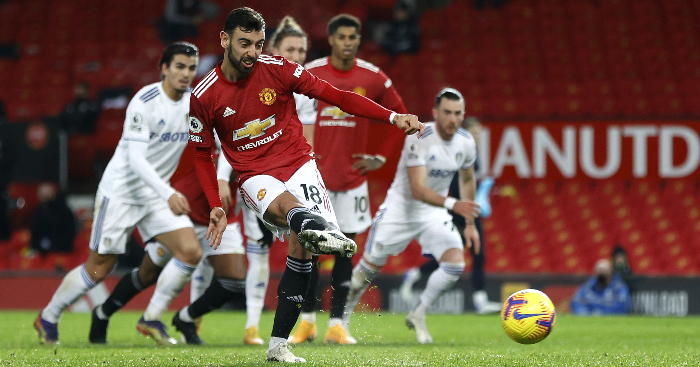 Bruno Fernandes once again took centre stage as Manchester United brushed Leeds United aside at Old Trafford in a 6-2 thrashing on Sunday.

Fernandes was on target twice and provided one assist, with Scott McTominay ending the game with the same record. Dan James and Victor Lindelof added some serious gloss to the scoreline too.

The first from Fernandes was a fine driven effort into the bottom corner after the ball had dropped kindly for him in the Leeds penalty area, with his second coming from the spot in the second half.

The Portuguese’s performance took his season tally to nine goals and five assists as he continues to drive Ole Gunnar Solskjaer’s side up the table.

United now sit in third place, just four points behind leaders Liverpool and with a game in hand over their arch-rivals.

While Fernandes’ direct contributions caught the eye, it was his link-up play that impressed plenty of viewers as well, particularly what is fast becoming a trademark move of his.

Twice in the first half, he was able to spring a counter-attack with a sublime flick in midfield.

Marcelo Bielsa had clearly instructed Kalvin Phillips to man-mark the United danger man but in both instances, the flick took the Leeds midfielder out of the game completely.