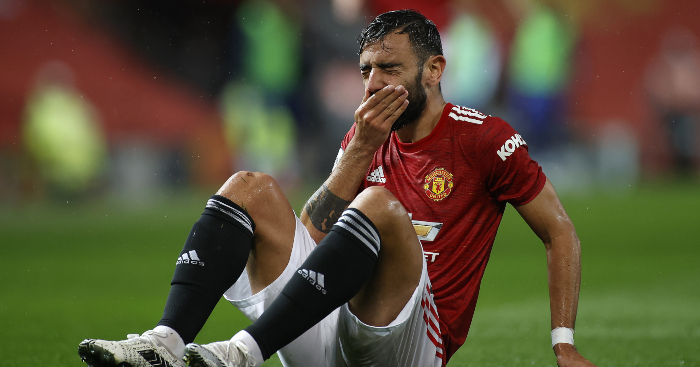 Patrice Evra was left frustrated by Manchester United‘s caution in their 0-0 draw with Chelsea at Old Trafford on Saturday – and one moment involving Bruno Fernandes and Luke Shaw perhaps explained why.

After the two teams played out a drab stalemate, Sky pundits Evra and Jimmy Floyd Hasselbaink provided more entertainment than the previous 90 minutes when they were involved in a heated exchange about whether the sides were playing “in fear”.

Evra’s frustration was perhaps summed up by Shaw turning down Fernandes’ invitation to make a run on the overlap with United on the attack following a set-piece.

Shaw refused to do so, instead opting to remain in position, with Fernandes eventually ignoring the left-back to pass the ball into the middle of the field.

Evra and Hasselbaink’s argument was subsequently reflected on social media, with some fans suggesting Shaw was right to stay in position and cover for any potential counter-attack, especially while still being in place to put in a cross if required.

Other fans, however, yearned for the dynamism of new signing Alex Telles down the left flank. We’ll leave you to decide which would have been the better option.

There are two players on Bruno, if Shaw overlaps he’s basically running into a worse position than he’s in

a simple pass to Shaw here and he could have easily crossed it in. pic.twitter.com/K4xDCAR67q

Telles would’ve of even needed to be asked that ball would’ve been whipped in straight onto Cavani’s head.