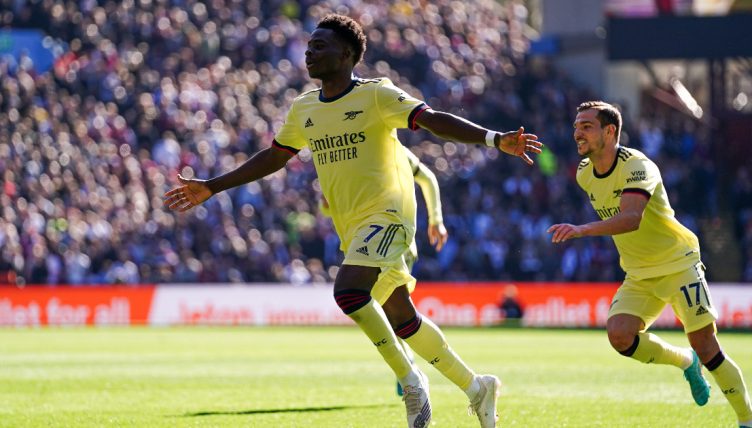 After Arsenal’s Bukayo Saka netted his ninth league goal of the season against Aston Villa, he continued his trend of entertaining celebrations.

Saka opened the scoring in the first half with an excellent finish from outside the box following a set-piece, with his fierce strike finding the back of the net beyond Emi Martinez.

The 20-year-old then ran over to the raucous away end and tried to do a knee slide but the pitch clearly wasn’t wet enough on a sunny afternoon.

His knee got caught in the turf but Saka showed great reactions to produce a roly-poly celebration that Robbie Keane would be proud of.

The winger was then grabbed by Alexandre Lacazette, before being joined by the rest of his team-mates, highlighting the unity within this current Arsenal squad.

Saka’s goal proved to be the winner as the game ended 1-0 to Arsenal, putting them in a very good position in the hunt for a top-four finish, and he was awarded Man of the Match for his performance.

“It’s a very big win, on the back of the Liverpool defeat midweek, we knew that today was even bigger,” Saka told BT Sport at full time.

“To get that result and the three points means so much for the rest of the season. We’re so happy.”

The wholesomeness levels were through the roof at Villa Park, as the England winger gave his shirt to a visiting fan at full time.

“I saw his sign from early! I just wanted to make the boy’s day so I gave him my shirt and I hope he can go home happy.”