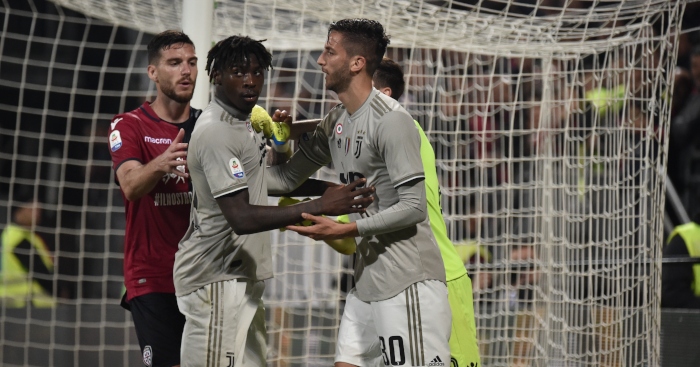 Italian football suffered another racism controversy on Tuesday night as Juventus teenager Moise Kean was racially abused by Cagliari fans – with captain Luca Ceppitelli confronting his own fans over their actions.

Kean and midfielder Blaise Matuidi were subjected to monkey chants from the home support before the striker celebrated his late goal to secure a 2-0 victory for Juve with his arms held aloft in front of the Cagliari fans.

That prompted further abuse, with Matuidi protesting to the referee and threatening to walk off – the midfielder had been subject to racist abuse at the same ground last year – as the match was halted for around three minutes.

Remarkably, Juve captain Leonardo Bonucci suggested Kean should shoulder the blame “50-50” with the supporters due to his celebration, with manager Max Allegri and Cagliari president Tommaso Giulini also criticising the 19-year-old’s actions.

Cagliari captain Ceppitelli, however, approached his own fans at the time of the incident, asking them to stop the abuse.

For as terrible as the continued race issues are in Italian football, #ceppitelli should be given some credit for his actions for literally standing up to racism. Hugely disappointed in Bonucci