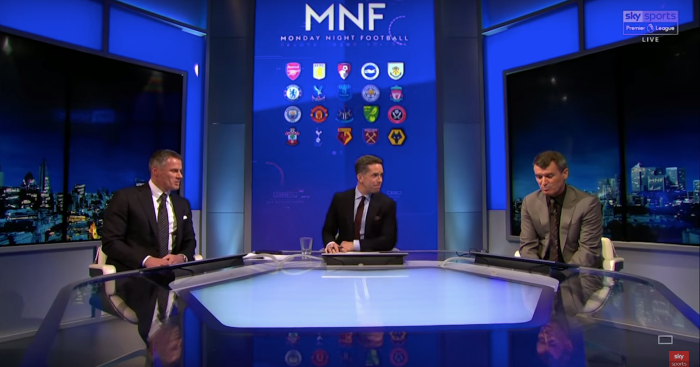 Jamie Carragher and Roy Keane argued once again in the Sky Sports studios as they tried to agree on a combined XI between Liverpool‘s current team and Manchester United‘s 1999 Treble winners.

Liverpool currently sit 25 points clear of second-placed Manchester City at the top of the Premier League table, prompting a debate over whether they’re the greatest side English football has seen since the top flight was rebranded in 1992.

Jurgen Klopp’s men have the Treble in sights, with Keane’s United side of 1999 the only English team to achieve that feat to date.

Carragher and Keane tried to decide on a combined XI of the two teams, which unsurprisingly led to some heated discussions.

It takes a little while to warm up, but when Keane starts by picking Peter Schmeichel in goal while admitting, “I wouldn’t say I liked Peter that much,” you know it’s going to be good,