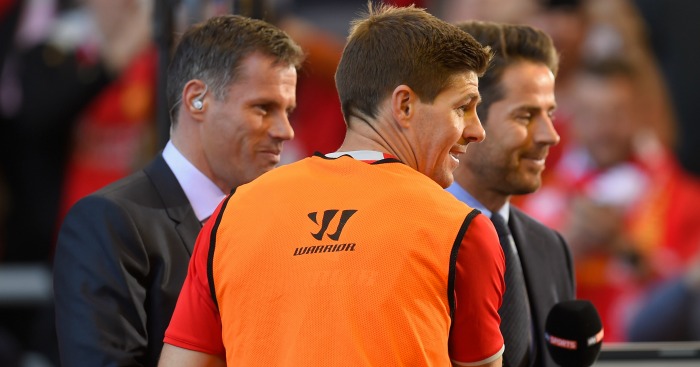 Liverpool‘s defending was once again the talking point after their 3-3 draw at Watford – prompting a heated argument in the Sky studios between former team-mates Jamie Redknapp and Jamie Carragher.

With Liverpool so far failing in their pursuit of Southampton’s Virgil van Dijk this summer and Nathaniel Clyne injured, the Reds started their opening Premier League fixture with a back four of Trent Alexander-Arnold, Dejan Lovren, Joel Matip and Alberto Moreno.

Familiar problems with defending set-pieces resurfaced as Watford went into the half-time break leading 2-1 thanks to goals from Stefano Okaka and Abdoulaye Doucoure.

Redknapp suggested that having Van Dijk at the back would help solve some of Liverpool’s woes, but Carragher passionately disagreed with the former midfielder’s assessment, provoking entertaining scenes during the interval.

Liverpool did take the lead in the second half thanks to Roberto Firmino’s penalty and a debut goal from Mo Salah, only for Watford to snatch a draw with another set-piece goal, this time from Miguel Britos.

And Carragher and Redknapp weren’t finished with their debate…