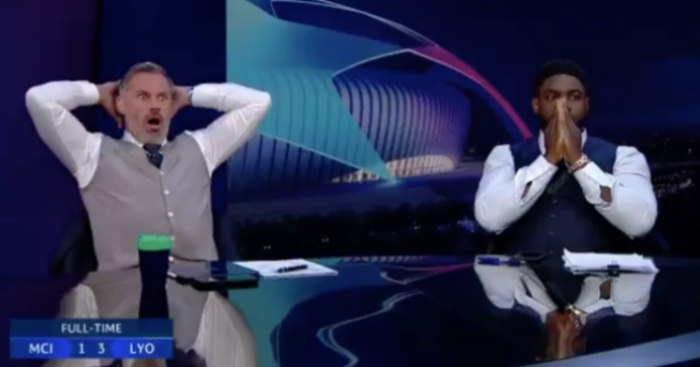 Jamie Carragher could not believe his eyes when he saw former Liverpool team-mate Raheem Sterling miss an open goal as Manchester City were knocked out of the Champions League by Lyon on Saturday night.

As City trailed 2-1 late on, Sterling missed a glorious opportunity to level the tie in the 85th minute but somehow managed to put the ball over the bar when faced with an open goal from eight yards out.

To compound his mistake, Moussa Dembele scored his second of the night, and Lyon’s third, just a minute later to secure the French outfit’s progression into the semi-finals.

The minute that sunk Manchester City 😱

Carragher was analysing the game for CBS Sports – and highlighted an intriguing City weakness prior to the match – alongside former Manchester City defender Micah Richards, and their reactions were absolutely priceless.

.@Carra23 and @MicahRichards were all of us watching that Sterling miss 😮😱 pic.twitter.com/41Ut1YEBp0