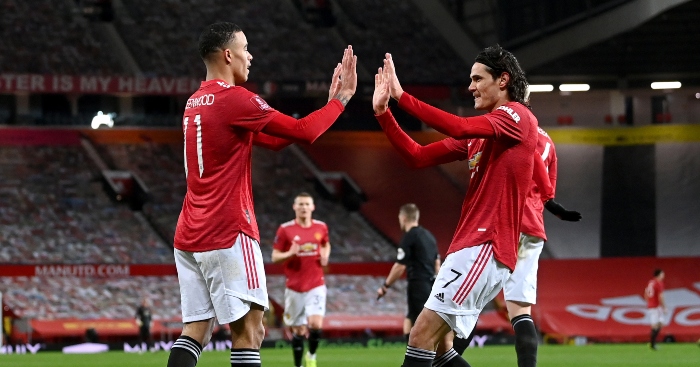 Edinson Cavani was caught on camera giving some passionate advice to Mason Greenwood during Manchester United‘s 3-2 win over Liverpool in the FA Cup Fourth Round.

Cavani joined United in the summer and is fast becoming a cult hero at Old Trafford – both for his goals and his incredible work rate.

While the Uruguay international didn’t score on Sunday, the BBC cameras caught him passionately mentoring Greenwood.

The youngster had just equalised for United when Cavani was shown throwing his arms behind his own head while vigorously making a point to his team-mate.

One of the reasons Cavani was brought in by Ole Gunnar Solskjaer was to provide an experienced voice to his young and talented forward line.

“He’s a centre forward that you want in the box. His movement is incredible, it’s for everyone to learn from,” Solskjaer recently said.

“He’s come down the side a few times and his movement is spot on, so he’s the type of centre forward that we’ve been looking for and he complements Marcus (Rashford) and Mason (Greenwood) and Anthony (Martial) really.”

On this evidence, it would seem he’s more than fulfilling that role.

Love this 🙌🏻 Take it all in Greenwood. I could watch Cavani all day ⚽️#learnfromthebest #cavani #greenwood #mufc ⚽️❤️ pic.twitter.com/tGpTvDYF2b