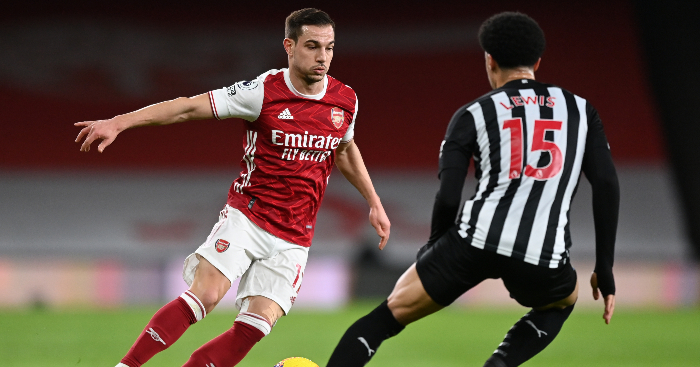 Cedric Soares was a surprise name on the Arsenal teamsheet for Monday evening’s clash with Newcastle, but he certainly didn’t let the opportunity to impress let him pass.

The Portuguese right-back had only been used in the cup competitions by Mikel Arteta so far this season, but the coach opted to give him a first Premier League start of the season for the visit of Steve Bruce’s Magpies.

Arteta’s show of faith was rewarded as Cedric put in a solid performance defensively, and offered plenty going forward.

He did brilliantly to tee up Pierre-Emerick Aubameyang’s second goal of the game to make it 3-0, darting into the box and keeping the ball in by a sliver, before cutting back to the striker.

But that wasn’t even his finest moment, which came about 10 minutes earlier. He looked to have been shepherded into a dead end, out by the byline, by Jamal Lewis, but showed some brilliant thinking to play a cheeky backheel through the Newcastle defender’s legs to get the ball back to Bukayo Saka.

The ball was then crossed into Alexandre Lacazette at the far post, but the header was denied by Karl Darlow. It’s a shame because it would have been a fitting end to a wonderful move.