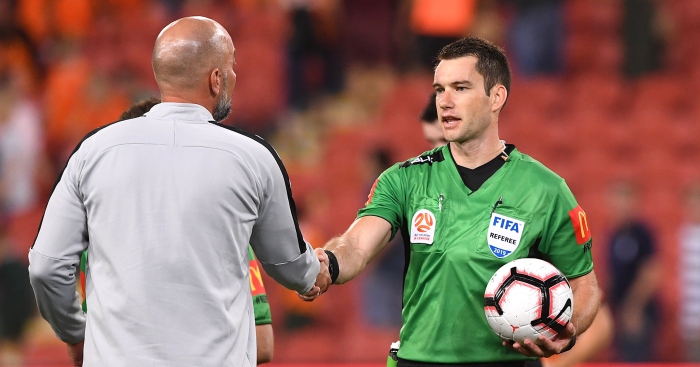 Jarred Gillett will become the first foreign referee in English football next season – and he provided a fascinating insight into his officiating by wearing a microphone for his final A-League fixture.

Australian Gillett has been named his country’s referee of the year on five occasions since he began taking charge of A-League matches in 2010 and will officiate in the Championship – and possibly the Premier League – from next season.

The 32-year-old is moving to England to study at Liverpool’s John Moores University, researching children with cerebral palsy, but is expected to help with the full introduction of VAR in England having gained experience with the system while working in Australia.

And for his final match in charge in the A-League, Western Sydney Wanderers’ 4-1 win over Brisbane Roar, he agreed to be mic’d up so fans could listen to him explain every decision and enjoy plenty of banter with his fellow officials and players.

One player even expresses his appreciation of Gillett’s refereeing over the years, but our favourite part of the video has to be the voice of the assistant referee, who seems to be the most Australian man alive.

• Every decision explained
• Every chat with a player heard

Watch: Mike Dean forgets how to run as Paul Pogba glides past the ref