Watch: Chaos in MLS as Philadelphia Union have two players sent off in 30 seconds 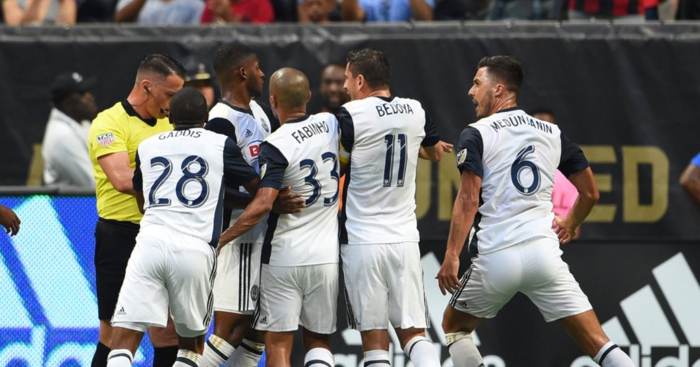 An MLS match between Atlanta United and Philadelphia Union descended into chaos as two Union players were sent off in the 19th minute.

Midfielders Alejandro Bedoya and Haris Medunjanin were sent off in the aftermath of a controversial penalty decision early in the first half.

A mistake had allowed Josef Martinez to run in on goal and Auston Trusty was adjudged to have brought the attacker down, though he appeared to have won the ball.

Bedoya, who had been booked earlier in the match, was shown a second yellow card by the referee for his protests – believed to be in the form of asking the official to use VAR.

Then mayhem ensued as a furious Medunjanin came storming in, attempting to face off with the referee, who quickly pulled out a yellow card.

The enraged No.6 wasn’t done there though, going back for another bite and being shown an immediate second yellow card.

Martinez netted a hat-trick, including two spot-kicks, as Atlanta won the match by three goals to one.

Can you name every American player to appear in the Premier League?