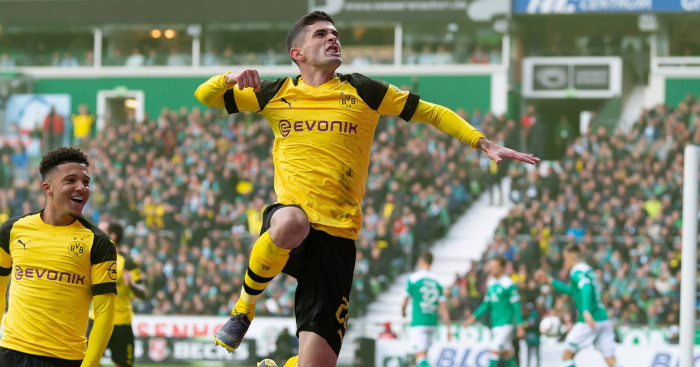 Christian Pulisic showed Chelsea fans they might not have to worry about losing Eden Hazard too much with a brilliant solo goal for Borussia Dortmund against Werder Bremen on Saturday.

Plenty of speculation surrounds Hazard’s future at Stamford Bridge, but Pulisic is one player the Blues know they will be able to count on next term after signing the winger in a big-money move in January, with the USA international remaining in Germany on loan until the end of the season.

Dortmund’s Saturday afternoon ultimately ended in disappointment as they let a 2-0 lead slip against Bremen, who scored twice in the space of five second half minutes to draw 2-2.

That lapse was compounded by Bayern Munich’s 3-1 win over Hannover, meaning the Bavarian’s lead at the top of Bundesliga was extended to four points.

But don’t let that take anything away from the quality of Pulsic’s opener – a goal which even Hazard would be proud of scoring.