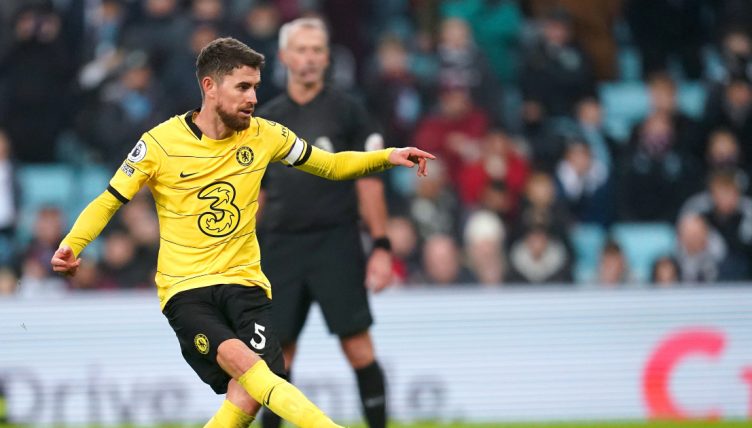 Chelsea used Gary Neville talking about penalties as a backing track for a hilarious video montage of Jorginho’s penalties this season.

The clip uses a soundbite of Neville saying “he can score with penalties” on repeat over a video of all of Jorginho’s converted penalties.

The Italian midfielder is Chelsea’s leading goalscorer this season with nine goals, all nine of which have been scored from the spot including braces against Malmo in the Champions League as well as Leeds and Aston Villa in the Premier League.

Chelsea’s forwards have been criticised this season for not being prolific enough.

Big-money summer signing Romelu Lukaku is Chelsea’s second-highest goalscorer so far this season with eight, but only five of those have come in the Premier League.

Mason Mount then follows with seven, while Timo Werner has six.

Jorginho is regarded as one of the finest penalty takers in the world but has missed some high-profile penalties for his country recently.

That includes one against Switzerland that would have secured Italy’s World Cup 2022 place.

However, his last penalty miss for Chelsea came on Boxing Day 2020 when he missed in a 3-1 loss against Arsenal.

The compilation highlights the variety of styles Jorginho employs when taking penalties.

That variety has contributed to his incredibly high success rate, missing just six penalties in his career whilst scoring 38, outside of shootouts.

His trademark style is to do a subtle hop before striking, less obvious than Bruno Fernandes’ similar method.