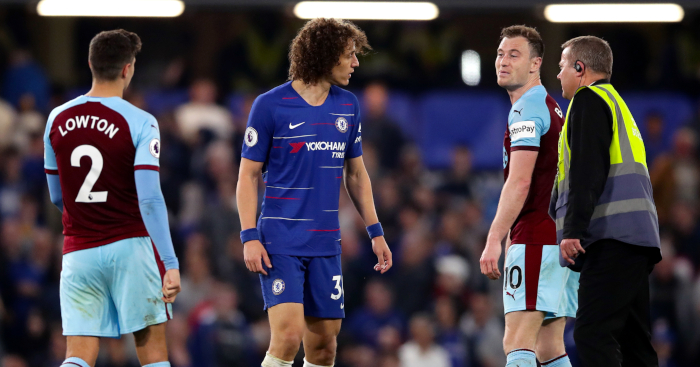 Tempers flared at Stamford Bridge on Monday night as Chelsea and Burnley played out an action packed 2-2 draw.

All four goals were scored in a crazy opening quarter, as Jeff Hendrick volleyed Burnley into the lead early on.

N’Golo Kante equalised for Chelsea before Gonzalo Higuain fired the hosts ahead with just 14 minutes on the clock.

Ashley Barnes made it 2-2 in the 24th minute, and the striker – linked with a surprise move to Stamford Bridge in January 2018 – became a thorn in the Chelsea side late on.

Mateo Kovacic was riled by Barnes with 10 minutes to go after a heavy challenge, with the forward openly laughing at the Croatia international.

And both sets of players clashed in stoppage time with Kovacic and Barnes again in the middle of things, alongside David Luiz.

Barnes again couldn’t help but laugh at his rattled opponents, with Luiz accusing Burnley of “anti-football” in an interview with Sky Sports after the match.

Even once the final whistled had been blown, players and coaches clashed on the sideline with Antonio Rudiger was clearly unhappy with a member of Burnley’s backroom staff.