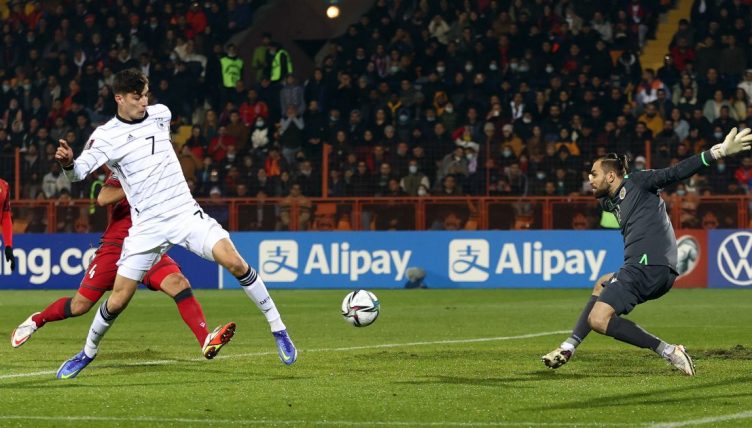 Germany beat Armenia 4-1 in their World Cup qualifier on Sunday after Chelsea’s Kai Havertz got them off to the perfect start with a very smart goal.

In the fifteenth minute, the ball was worked out to wing-back Jonas Hoffman and he slipped a terrific cross into the centre, where Kai Havertz was waiting.

The Chelsea forward then applied the perfect finish.

With the outside of his left boot, Havertz subtly and cleverly guided the ball past the goalkeeper and into the far corner of the net.

Despite scoring the winner in last season’s Champions League final, Havertz has not had everything his own way at Stamford Bridge.

Having taken time to adapt to his new surroundings, he picked up form at the back end of the 2020-21 campaign.

But at the start of 2021-22, he has dropped off again, scoring just two goals and providing no assists in his 10 Premier League appearances so far.

Havertz had also been an injury doubt in the lead up to the Armenia game, but he quickly put any worries to bed with this goal.

Thomas Tuchel will surely be pleased to see his man getting back in the groove.