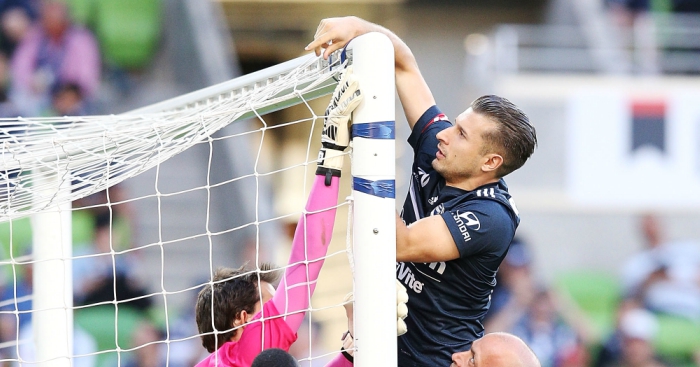 Australia’s A-League resembled a scene from Sunday league this weekend as the Melbourne Victory players had to give each other a boost to fix the nets with gaffer tape during their win over Central Coast Mariners.

Melbourne thumped the Mariners 5-2 at AAMI Park thanks to Besart Berisha’s hat-trick and goals from Leroy George and Christian Theoharous.

The Victory’s third-consecutive win lifted them above rivals Melbourne City into third in the table, but the match will be remembered for the farcical scenes in the second half.

After one attempt hit the side of the netting, it began to unravel, leaving a hole in the top corner of the goal.

Play was stopped until the net could be fixed, but with ground staff taking their time, Melbourne’s players took matters into their own hands, with Kosta Barbarouses given a boost to reach the top corner.