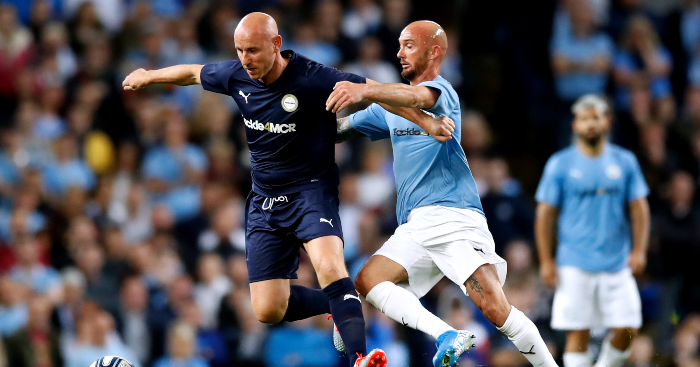 Nicky Butt and Craig Bellamy may have long since left Manchester United and Manchester City, but there was clearly no love lost between the duo in Vincent Kompany’s testimonial match.

Butt and Bellamy were team-mates for half a season at Newcastle before the latter joined Celtic on loan after controversially clashing with both manager Graeme Souness and Alan Shearer.

Bellamy later impressed at Manchester City and was back at the Etihad to appear for City Legends in a testimonial match for Kompany against a team of Premier League Legends, which featured plenty of former Manchester United players.

That was always going to add a bit of spice to the clash, and Bellamy was left fuming after one heavy tackle from Butt, which the commentators couldn’t help but laugh at.

It's half-time at the Etihad where it's 1-1 between the Manchester City legends and the Premier League All-Stars! 🔵⭐ pic.twitter.com/XbVXQxmu1x