Watch: Crazy Leeds goal ruled out after it was handballed in by Stuart Dallas 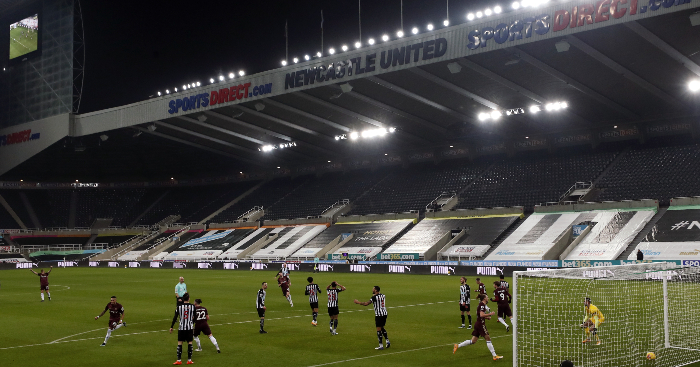 Leeds completed a league double over Newcastle with a 2-1 win at St. James Park, but they weren’t entirely comfortable in the second half.

Things might have been a bit easier had this goal been allowed to stand – although it would have take a particularly inept referee, not to mention VAR, not to have spotted the infringement from Leeds utility man Stuart Dallas.

The ball crossed the line in the opening stages of the second half, but it was immediately apparent that something wasn’t right – and it would have been quite some cheek from Dallas to celebrate and try claim it.

The Northern Ireland international was arriving late at the penalty spot to get a shot away at goal, but it was blocked at close range by Newcastle skipper Jamaal Lascelles. It then ricocheted back and hit Dallas again after he’d fallen to the ground, before looping up and dropping in on the underside of the crossbar.

The only issue is that the second touch came off his flailing arm. It would have been impressive if he’d meant to do this, but it looks as though it was just a freak moment.