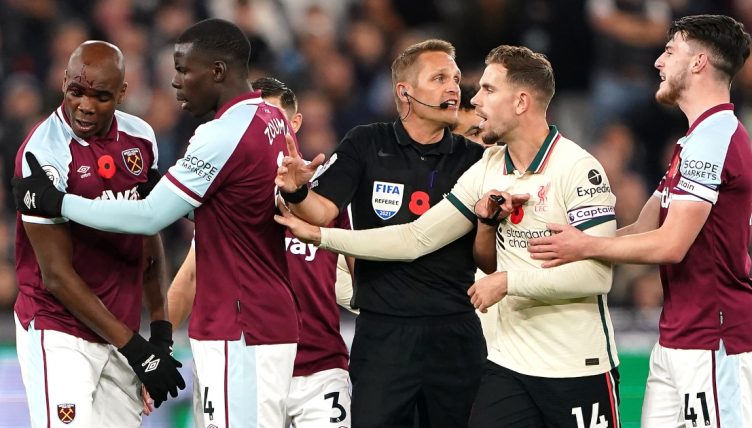 There was plenty of controversy during the opening stages of Liverpool‘s game against West Ham United at the London Stadium.

West Ham took the lead in the fourth minute when Alisson Becker failed to deal with Pablo Fornals’ corner and scored an own goal.

Alisson felt that he had been blocked by Angelo Ogbonna in the build-up but the goal was allowed to stand following a lengthy VAR review.

VAR was called into action once again following Aaron Cresswell’s challenge on Jordan Henderson in the eighth minute. Referee Craig Pawson didn’t even give a free-kick but replays showed that the left-back caught Henderson with the follow-through.

“He won the ball, but the actual follow-through doesn’t look great,” Jamie Carragher said during commentary. “I think he may have a problem here.”

While Carragher felt that Cresswell could get sent off, VAR’s Stuart Attwell ultimately deemed that the tackle didn’t warrant a red card.