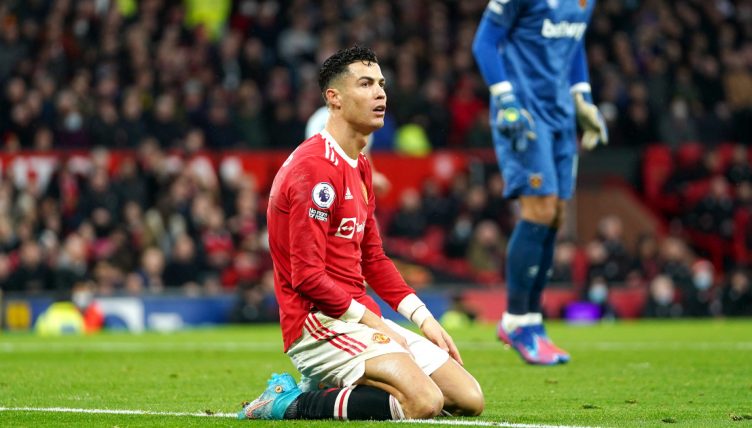 Cristiano Ronaldo missed a golden opportunity to put Manchester United one goal up against West Ham in their Premier League match.

The opportunity came with United on top as the match approached the 20th-minute mark.

Bruno Fernandes combined with Alex Telles on the left of Manchester United’s attack, the Portuguese midfielder flashing a sensational and penetrating ball into the West Ham box.

Ronaldo made the right run but failed to connect with the ball, throwing himself at it with a diving header but completely missing the ball.

It was the best attacking move of the half from United which ended with neither side having a shot on goal.

In the Premier League United beat West Ham 2-1 at the London Stadium with Jesse Lingard scoring the winner and David de Gea saving an injury-time penalty from Mark Noble.

Ralf Rangnick has only lost one match as Manchester United temporary manager so far, to Wolves at home when United slumped to a 1-0 loss.

Prior to the West Ham match, he had won five of his nine games at the helm and had drawn three others.

Both Manchester United and West Ham are in the battle for the top four with a place in the Champions League a possibility for both sides.

However, Arsenal and Spurs have games in hand on both sides and will be eyeing up a place in the top four themselves.