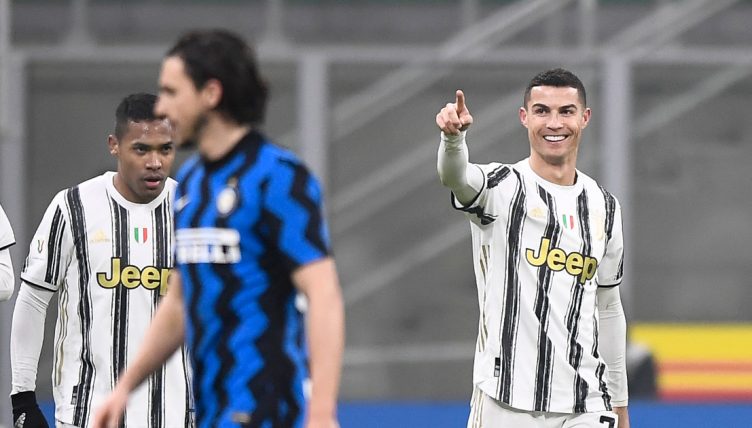 After a brilliant Milan derby in the Coppa Italia last week, we’ve been treated to another big occasion with the Derby d’Italia between Juventus and Inter Milan. As ever, the man for the moment was Cristiano Ronaldo.

Inter Milan won an epic contest against their city rivals to set up this match, which also hasn’t disappointed with a trio of first-half goals.

Lautaro Martinez did well to put the hosts ahead in the Coppa semi-final, but Ronaldo was on hand to equalise with a confidently struck penalty.

And by the 35th minute, Juventus were ahead, with their Portuguese talisman on his toes and able to exploit a terrible mix-up at the back between Samir Handanovic and Alessandro Bastoni.

The Inter keeper got his positioning completely wrong, ending up stranded in no man’s land, but Bastoni ought to have sensed the danger from the pressing striker – booting it into the stands would have been better than taking a touch to allow Ronaldo to nick it off him.

It was a tidy finish, too, once he’d done all the work to give himself the shooting opportunity.

Cristiano Ronaldo takes advantage of some poor positioning from Samir Handanovic to give Juventus the lead vs. Inter! 💥 pic.twitter.com/PBNt7IqpTV