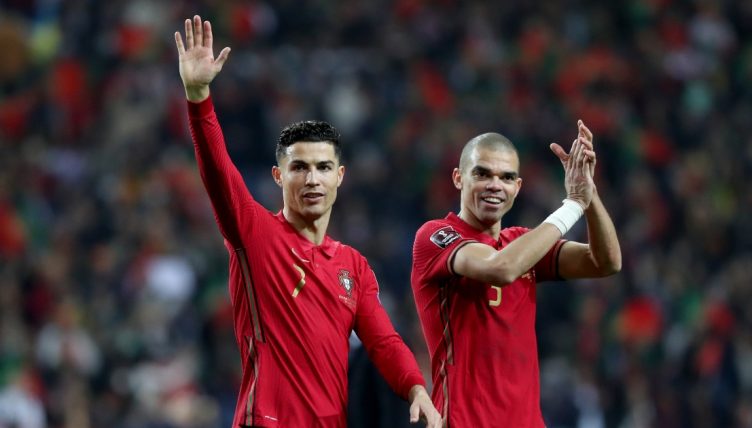 After finishing second in their qualifying group to Serbia, Portugal were forced to go through the play-off route to book their tickets to the 2022 World Cup.

They beat Turkey 3-1 in the semi-final and then had to face North Macedonia, who sent shockwaves around the world of football by knocking out Italy.

Ahead of the clash with North Macedonia, Ronaldo and Cedric were involved in a training rondo alongside a number of their team-mates.

As the rondo descended into a round of head tennis, Ronaldo nodded the ball to Cedric, who leapt into the air to head the ball to another team-mate.

Ronaldo – who is renowned for his incredible jumping ability and has scored a lot of headed goals in his career – was quick to mock Cedric’s technique before imitating him.

Bruno Fernandes stepped up to score both of Portugal’s goals in their 2-0 win over North Macedonia, with Ronaldo and Diogo Jota on hand to lay on assists for the midfielder.

Cedric was an unused substitute as Manchester City’s Joao Cancelo started at right-back.

Ronaldo will now be able to play at the fifth World Cup of his career – meaning he has appeared at every edition of the competition since 2006.

“Goal achieved, we’re at the Qatar World Cup,” the 37-year-old wrote in a post on Instagram after the game. “We’re in our rightful place! Thank you to all the Portuguese people for the tireless support! Let’s go Portugal!”

😂 | Cristiano Ronaldo with an imitation of Cédric’s jump and header.

Rashford next? The five players to play for Arsenal & Man Utd in the PL