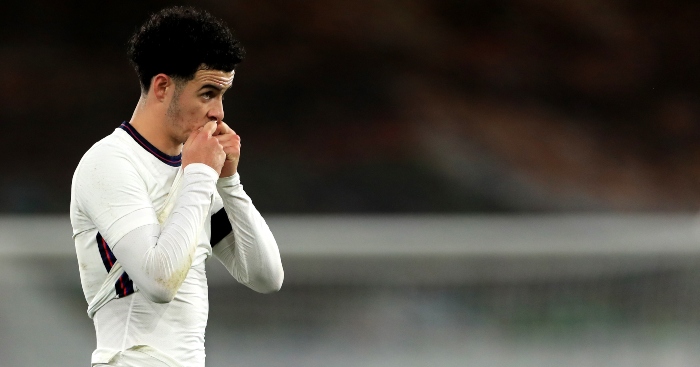 With this outrageous piece of skill, Liverpool midfielder Curtis Jones confirmed his prodigious talent to us all.

Jones has established himself in Liverpool’s first-team squad over the past year and became the club’s youngest ever captain during their FA Cup game with Shrewsbury Town in February 2020.

Jurgen Klopp clearly rates him highly, and this clip demonstrates why.

While footballers deal with unique pressures in their profession, some moments take you back to playing in the schoolyard with your mates and engaging in a competition of one-upping each other.

It’s heartening to see this same mentality in professional players. During an England Under-21 training session, Jones took on Leicester’s James Justin in a one v one match with the singular aim of humiliating his opponent.

Drawing Justin in with some teasing stepovers, Jones proceeded to slip the ball through the defender’s legs and slot the ball into the tiny goal. The whole movement was like something out of FIFA Street.

What made things for us was the sight of a nearby team-mate holding his hands on his head in disbelief.

Proof, if any was needed, that moments of outrageous skill bring out the amazed child in all of us.