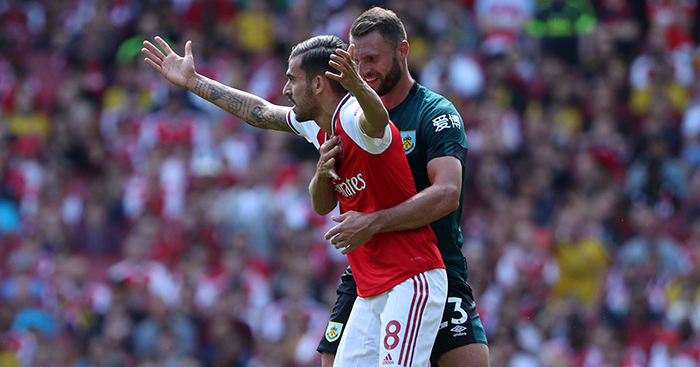 Dani Ceballos set up both goals and was named Man of the Match in Arsenal‘s 2-1 win over Burnley on Saturday – and supporters are understandably getting quite excited.

Ceballos, on loan for the season from Real Madrid, made his debut for the Gunners as a substitute in the win at Newcastle on the opening weekend but was named in the starting line-up alongside fellow new signing David Luiz for the Emirates Stadium curtain-raiser.

And after his corner led to Alexandre Lacazette’s opening goal, Ceballos was the hero later on when his tenacious work to recover possession saw him set up what proved to be the winner scored by Pierre-Emerick Aubameyang midway through the second half after Ashley Barnes had levelled things up just before half-time.

That was one of seven times Ceballas won the ball back for Arsenal as he quickly proved himself as a player capable of doing both sides of the game, as is required in the Premier League.

And there was no better example of that than just before the half-hour mark when the Spaniard won a header in midfield, showed great skill and composure to turn away from three Burnley players, and then used his strength to keep hold of the ball even while being fouled.