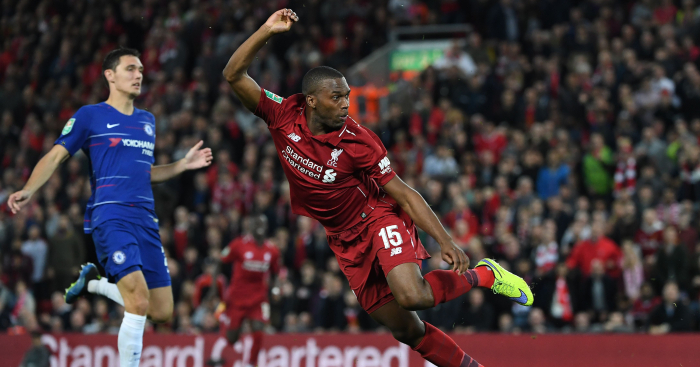 Daniel Sturridge had a mixed night in front of goal as Liverpool were beaten by Chelsea at Anfield in the League Cup.

Sturridge, who spent four years at Chelsea before joining Liverpool, has enjoyed something of a resurgence on Merseyside so far this term.

The striker has worked his way back into Jurgen Klopp’s plans after spending the second half of last season on loan at West Brom.

Having scored on the opening day of the season against West Ham, the 29-year-old also notched in his first start of the campaign against PSG in the Champions League.

Sturridge was handed another start in the League Cup as the Reds faced his former club in the third round.

The England international should have given the hosts the lead just after half-time when he pounced on a sloppy back pass to round Willy Caballero, only to somehow put the ball well wide.

The @LFC striker misses a glorious opportunity against his former side!

Sturridge did, however, atone for his miss by scoring an excellent overhead kick to put Liverpool ahead in the second half.

But Chelsea fought back as Emerson Palmieri poked home from close range and substitute Eden Hazard scored an outrageous solo goal to win the tie.

Where are they now? Liverpool’s 10 youngest Premier League goalscorers