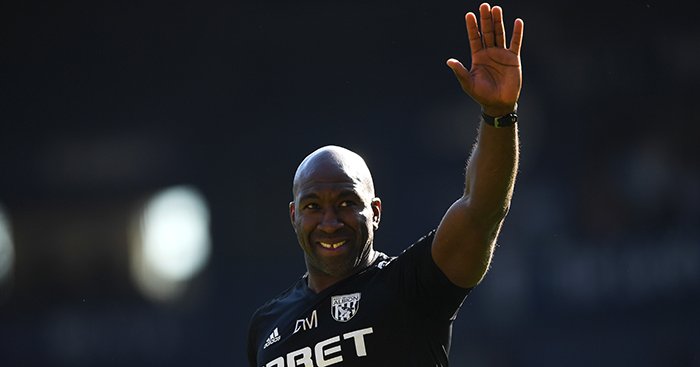 West Brom kept their survival bid alive with a 1-0 win over Tottenham on Saturday – but Darren Moore remained ice cool on the touchline.

West Brom were 10 points from safety with only six points remaining when Moore was placed in caretaker charge in April, with Alan Pardew losing his job on the back of eight successive defeats.

Remarkably, Albion have now won three and drawn two of their five games under Moore, moving them off the bottom and within two points of fourth-from-bottom Swansea City with a game to play.

Their latest win was secured in dramatic fashion when Jake Livermore scored against his former club in the 92nd minute, but Moore could hardly have looked more calm as fans rose to their feet behind him.

A win for Southampton in the late game at Everton would still see West Brom relegated, as would a victory for either the Saints or Swansea when they meet in midweek, but supporters are already calling for the Albion board to give Moore on a permanent basis.

If they can complete another Great Escape, they surely won’t hesitate.

A tribute to Peter Odemwingie, a wonderful player unfairly remembered