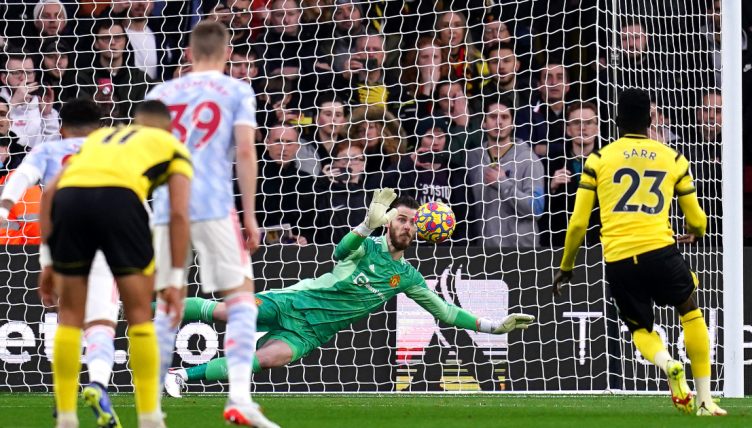 David de Gea saved successive penalties for Manchester United in the opening moments of their Premier League clash with Watford at The Hawthorns.

He twice saved from Ismaila Sarr, who twice shot poorly to the United goalkeeper’s left.

The first was given after a poor Bruno Fernandes attempted pass skimmed the ball and went towards goal. With Josh King bearing down on goal Scott McTominay bought him down and a penalty was given, but VAR decided it was not enough to give a red card to the Scotsman.

With Watford’s former regular penalty taker Troy Deeney now at Birmingham City, Sarr stepped up to take over penalty duty but his weak effort was easily saved by De Gea. The follow-up was scored by Kiko Femenia, until VAR decided he had encroached in the area.

Since it was also determined Aaron Wan-Bisakka had encroached, the penalty was ordered to be retaken with Sarr stepping up once again. De Gea then saved once more and United were able to clear.