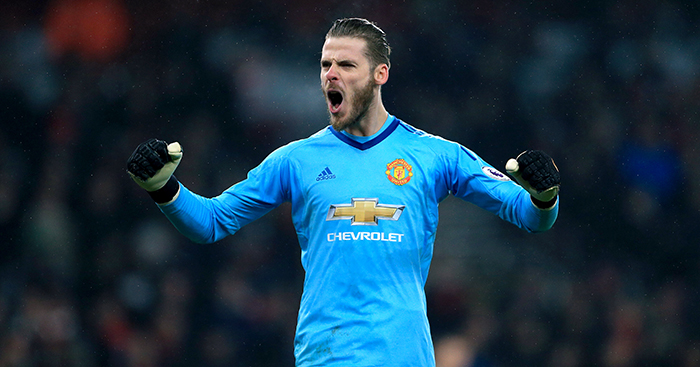 Jose Mourinho said David de Gea’s display in Manchester United‘s win at Arsenal was the “best from a goalkeeper in the world” – and no wonder.

An early goal from Antonio Valencia and two from Jesse Lingard, either side of Alexandre Lacazette’s reply, earned United an impressive victory at Emirates Stadium on Saturday, but it was De Gea that took most of the plaudits at the end of a thrilling game.

The Spaniard made 14 saves in total, equalling the record in a Premier League game since Opta began collecting data, with Arsene Wenger describing him as “man of the match by a clear mile”.

De Gea’s best moment undoubtedly came early in the second half, with the game finely poised at 2-1, when he made an outstanding save low down to his right to deny Lacazette before quickly reacting to stop Alexis Sanchez on the rebound.

United, who had Paul Pogba sent off in the 74th minute for a poor tackle on Hector Bellerin, closed the gap on Manchester City to five points ahead of the Blues’ game against West Ham on Sunday afternoon.