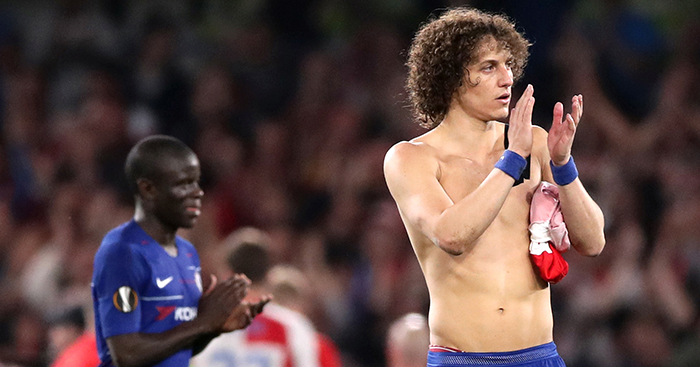 Chelsea survived a second-half fightback from Slavia Prague to make the semi-finals of the Europa League on Thursday – but whatever happened, David Luiz was going to be celebrating.

The Blues were 4-1 up at half-time, leading 5-1 on aggregate and seemingly cruising into the last four, but Petr Sevcik scored two brilliant goals for Slavia early into the second half to create some nerves around Stamford Bridge going into the final half hour.

“Probably at the end of the first half we thought we had qualified and against this opponent it was not true,” Maurizio Sarri said afterwards.

Thankfully for Sarri and his players, their mini-collapse did not cost them, and they can now look forward to the first leg of their semi-final at Eintracht Frankfurt on May 2 having become the second English club to have reached 100 goals for the season.

But even if Chelsea had lost, fans would have seen the unmistakable figure of David Luiz celebrating after the final whistle. Watch the hilarious moment the Brazilian was congratulated by his lookalike, Slavia defender Alex Kral, below.

David Luiz congratulating himself after the final whistle. pic.twitter.com/otx5jDpFf0