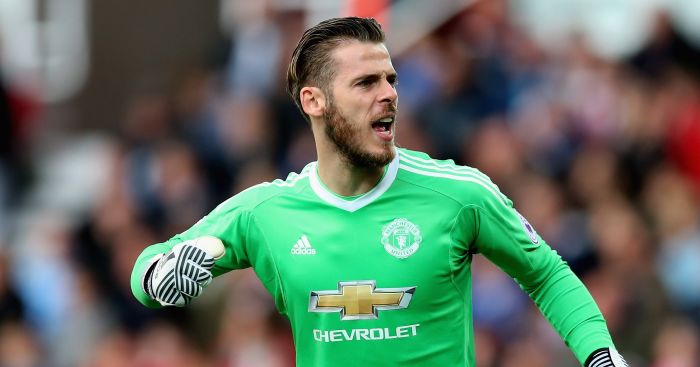 David de Gea pulled off an incredible save in Manchester United‘s 2-2 draw at Stoke City in the Premier League on Saturday evening.

Stoke opened the scoring – the first time the Red Devils have conceded this season – when Eric Maxim Choupo-Moting swept past De Gea on 43 minutes after a superb cross from Mame Biram Diouf.

However, United were back level less than three minutes later with a bizarre goal when Paul Pogba headed Henrikh Mkhitaryan’s corner home via the back of Marcus Rashford’s head. United weren’t complaining…

And they were ahead 12 minutes after the interval, with Mkhitaryan again the architect as his lovely through ball was converted at the second attempt by Romelu Lukaku.

Five minutes later Stoke almost scored, but Jese was denied by the save of the season so far from De Gea. A point-blank effort from the new arrival at the Bet365 Stadium was somehow turned over by his compatriot.

What a brilliant save by De gea…
This guy is obviously a beast! pic.twitter.com/StLVbVxYvV

But there was no saving the Potters’ equaliser only moments later when Choupo-Moting found space inside the box from a corner and headed the ball into the net.

The 2-2 scoreline kept the Red Devils on top of the Premier League ahead of neighbours Manchester City.