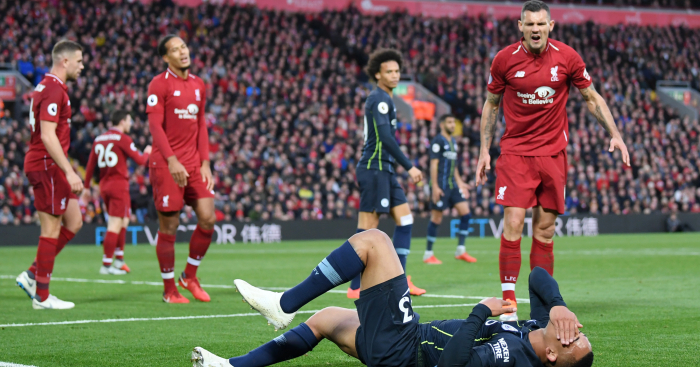 Dejan Lovren may have been making his first Premier League start of the season for Liverpool against Manchester City – but he showed no signs of rustiness with an excellent last-ditch tackle on Gabriel Jesus.

Despite an impressive second half of 2017-18, Lovren has struggled to break into Jurgen Klopp’s starting XI this term due to the superb form of Joe Gomez and Virgil van Dijk.

The centre-back was handed a first league start of the campaign against City as Gomez switched to right-back.

It could have been a daunting prospect for the Croatia international as he lined up against City’s dangerous attackers, but the 29-year-old barely put a foot wrong as Liverpool held the visitors to a 0-0 draw – albeit with Riyad Mahrez’s late penalty miss to thank.

Lovren, often accused of being erratic in the past, also made an eye-catching intervention with just under 20 minutes to go as he halted Jesus one-on-one with a brilliant sliding challenge.