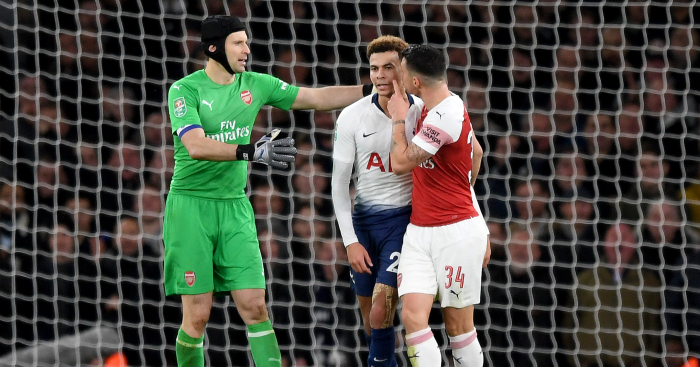 Dele Alli had a busy night as Tottenham dumped Arsenal out of the League Cup with a 2-0 win at the Emirates.

Spurs progressed to the semi-finals of the competition, where they will face Chelsea, thanks to goals in either half from Son Heung-min and Alli.

As well as his goal, Alli was involved in most of the night’s flashpoints.

The England international doubled the visitors’ lead in the second half with a brilliantly taken finish from Harry Kane’s excellent pass.

Ugly scenes later followed as the midfielder was hit by a bottle thrown from the crowd.

But Alli had the last laugh as he cheekily chipped the ball past an on-rushing Petr Cech, despite knowing he had been flagged offside.

To rub salt into the hosts’ wounds, the Spurs star gently ushered the ball over the goalline, much to the annoyance of Granit Xhaka.