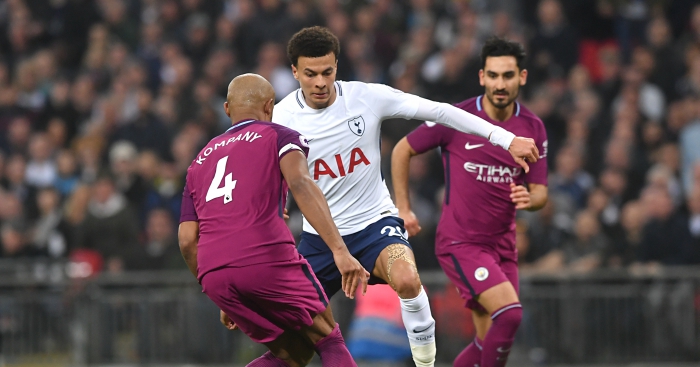 Tottenham midfielder Dele Alli pulled off an excellent nutmeg on Manchester City man Ilkay Gundogan as their sides met in the Premier League on Saturday evening.

His side were trailing 2-1 at the time, as they looked to emulate Manchester United having come back from two goals down against Pep Guardiola’s men.

Gabriel Jesus opened the scoring in the 22nd minute before Gundogan netted from the penalty spot just three minutes later.

Christian Eriksen then pulled one back just before half-time, as Harry Kane made up for claiming what would have been Eriksen’s second goal at Stoke last week.

However hopes of a United style comeback were dashed when Raheem Sterling completed the scoring with 20 minutes to play.

Just after the half-time interval, Spurs were looking to break, and Alli received the ball facing his own goal, before a deft touch and quick turn saw him nutmeg his opposite number and race into the City half.

Watch the brilliant piece of skill below.