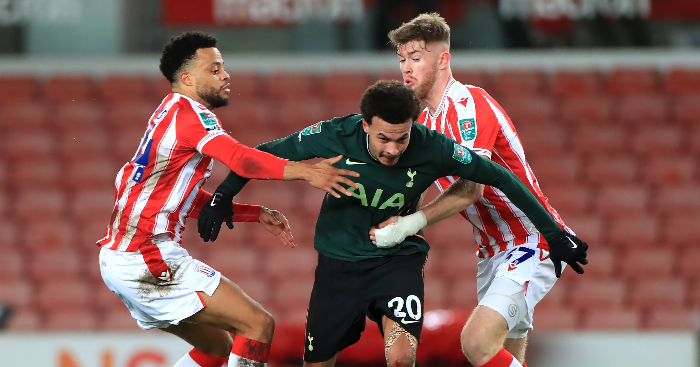 It was a mixed night for Dele Alli as Tottenham made it past Stoke in the League Cup quarter-finals with a 3-1 win at the Bet365 Stadium.

Since being taken off at half-time in the opening weekend’s 1-0 defeat to Everton, Alli’s only starts have come in the cup competitions, while there’s increasing talk that he’ll be sent out on loan in January.

The match against Stoke was an opportunity to show what he can offer and work his way back into his manager’s plans, but Jose Mourinho said he was angered after the 24-year-old lost possession in the build-up to Stoke’s equaliser midway through the second half.

Not long after, Alli was substituted off, and looked immensely frustrated as he trudged off. But the night wasn’t without its bright points, with a sensational double nutmeg earlier on.

He did brilliantly to take the ball forward before taking a couple of deft touches to hold the ball up, beating the same man again.