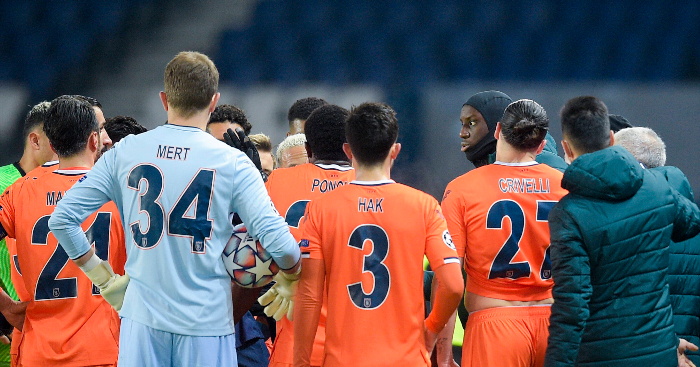 Extraordinary scenes have unfolded in Paris after a member of Istanbul Basaksehir’s coaching staff was allegedly subject to a racist comment from the fourth official during their match against PSG.

The Turkish champions elected to leave the field in response to the comment from the match official, who is said to have described one of the visiting contingent as “this black guy”.

Footage from the match captured the former Newcastle and Chelsea striker Ba speaking out to the referee.

“You never say: ‘This white guy.’ Why when you mention a black guy, you have to say this black guy,” he can be heard saying.

The match was subsequently suspended, with PSG’s players walking off with Istanbul Basaksehir in support.

Ian Wright was one of several prominent football figures to take to social media to express support for Ba and Istanbul Basaksehir.

This response from İstanbul Başakşehir is exactly how teams should handle racist incidents.

Leave the pitch. Don’t stand for it. The fourth official accused has now been replaced by the VAR official in their game against PSG. pic.twitter.com/Qzpm8qBFR4