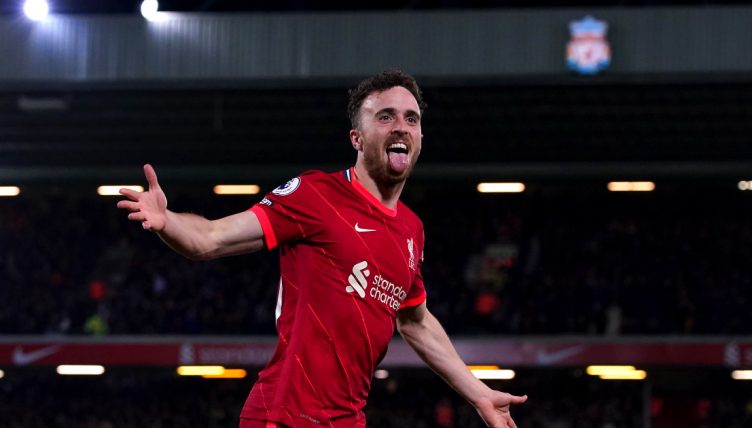 It was an intense emotional night at Anfield on Wednesday as Liverpool defeated Leicester on penalties in the EFL Cup quarter-final – and that emotion poured from Diogo Jota after he’d netted the winning penalty.

The game was a bona fide thriller, finishing 3-3 in normal time. Jamie Vardy opened the scoring for the visitors inside 10 minutes, before doubling Leciester’s led four minutes later.

Alex Oxlade Chamberlain pulled one back with a rasping drive before James Maddison produced a stunning 25-yard strike to make it 3-1 before the break.

Yet Jurgen Klopp’s reds showed terrific spirit in the second half.

Diogo Jota made it 3-2 before this season’s EFL Cup hero Takumi Minamino popped up in the fifth minute of injury time to send the game to a shootout, which Liverpool won 5-4, with backup ‘keeper Caoimhin Kelleher and winning spot-kick scorer Diogo Jota the heroes.

During the ninety minutes, there had been tension in the stands, with the visiting Leicester fans singing the moronic, brainless ‘feed the Scousers’ chant.

The winning penalty must have felt very sweet in the circumstances and Jota scored it in front of those Leicester fans, who he ran towards and taunted after converting.

As he did, the Liverpool players ran to him and Kelleher, embracing them for the role they played in sending Liverpool into the semi-final.

After the game, Jurgen Klopp said he hopes that the semi-final, which will see Liverpool take on Arsenal for the right to face Tottenham or Chelsea, will be played over just one leg.

“I think it will be better with one game, absolutely, but obviously what I say is not important,” he said.

“Look, I have been speaking out about player welfare, not just this year, but for the past six years or longer. But the only thing I do is to create headlines not change.

“If the things I say would help more I would say it more often. Tomorrow at 4pm we have a meeting, but with the Premier League not the EFL.

”Of course, I would prefer one game and the draw is at Arsenal first so fine, we can play there and see who is better and go from there. But I really can’t see any changes to be honest.”

Liverpool players mob goalkeeper Caoimhín Kelleher after he made two saves in the penalty shoot-out to take them through to the semi-final 🔴 👏 pic.twitter.com/vnhDqZKpLe

Ryan Babel didn’t fulfil his potential, but football needs more like him