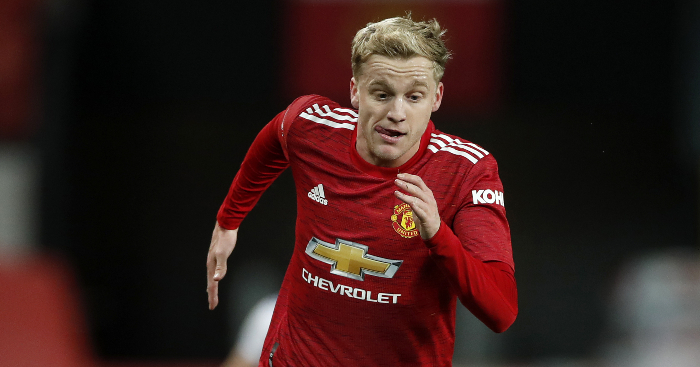 Donny van de Beek hasn’t had a lot of chances to show what he can do at Manchester United since his summer move from Ajax, but he took his opportunity against Everton.

With Ole Gunnar Solsksjaer searching for his first trophy as Manchester United manager and a place in the League Cup semi-finals at stake, the Norwegian coach made nine changes from the side that thrashed Leeds 6-2 at the weekend.

But the new faces looked raring to go at Goodison Park, keen to state their case to start on the regular as United made a lively, dominant start against Carlo Ancelotti’s side without quite forcing a goal in the opening half-hour.

One of the bright moments came with Van de Beek pressed by three Everton bodies out by the byline. He did brilliantly, taking two touches to dispatch the ball out into space, but unfortunately for the Netherlands international his team-mate wasn’t quite able to get onto the end of it.

United kick off in the early afternoon slot on Boxing Day, and on the early evidence of their League Cup clash, he’ll have some difficult decisions to make when it comes to the tricky test at Goodison Park.