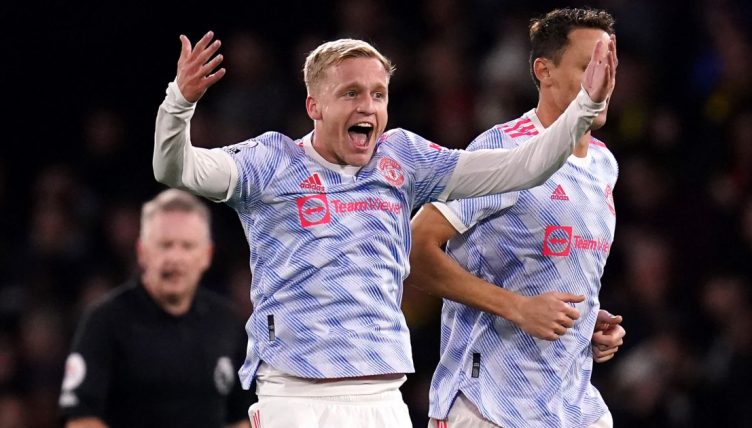 Manchester United bounced back from Ole Gunnar Solskjaer’s sacking with a 2-0 win over Villarreal on Tuesday night – and Donny van de Beek couldn’t hide his joy with Jadon Sancho, who bagged his first United goal late on.

It has been a turbulent week for Manchester United. A 4-1 battering at the hands of Watford was the final straw for club directors, who decided to sack manager Solskajer on Sunday.

With the Champions League game against Villarreal on Tuesday night, though, United had a chance to bounce back quickly.

They took it, with Van de Beek and Sancho, both of whom struggled to find form under Solskjaer, getting starts in Michael Carrick’s first XI as interim boss.

Sancho certainly seized his opportunity with both hands, finishing a sweeping team move in the 90th minute to get his first goal since his summer move from Borussia Dortmund and seal the win.

A few minutes later, after the referee had blown the whistle for full-time, Sancho went over the bench and Van de Beek couldn’t hide his delight for his young team-mate.

The Dutch midfielder grabbed Sancho around the back of the head and screamed at him ecstatically as Carrick watched on.

It was a lovely little moment between two players who’ve been going through a tough time of late.

Donny being happy for Sancho. My heart ❤️🥺 pic.twitter.com/EycP67MdXt